Specified by More Architects & Engineers than Any Other System

The System of Choice for Installation Contrators 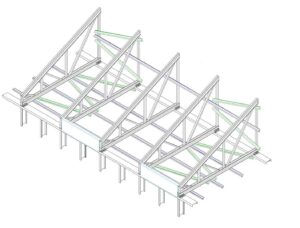 There are several reasons for truss bracing in a roof or floor structure. During construction, before all of the components of a truss system are in place, bracing acts to hold members upright, straight, and in place. This “temporary restraint” typically may not be the responsibility of the structural engineer. However, contractor clients may hire the engineer or component manufacturer to design this temporary bracing, since it can be very costly and dangerous if improperly addressed.

Truss restraint also acts to transfer loads to other parts of the structure that can better resist these loads. Often, a single truss or truss member cannot take certain loads by itself. Specific types of restraint can often help redistribute the load over multiple trusses or to stiffer supports if needed. For individual truss members, if the axial load is too high for a given slenderness, weak axis bracing can reduce the effective length and increase member capacity.

Temporary Restraint is covered in the CFSBCSI: Guide to good Practice for Handling, Installing, Restraining & Bracing of Cold-Formed Steel Trusses. It is the restraint placed in the trusses at the time of truss erection. Temporary restraint is often kept in the structure and allowed to double as permanent restraint. It may also be used to facilitate truss installation by reinforcing them against the different stresses induced during lifting or staging. Often, several trusses or even an entire section of roof or floor may be connected together and lifted in place.

Permanent Restraint is covered in CFSBCSI: Guide to good Practice for Handling, Installing, Restraining & Bracing of Cold-Formed Steel Trusses. This is restraint that is required to stay in the truss system for the life of the structure. Permanent restraint helps resist the long and short-term loading and load combinations specified in the building codes. Proper attention to the permanent restraint design will insure the structure will meet the demands placed upon it during its service life. See also CFSB3: Permanent Restraint/Bracing of Chords and Web Members.

Sheathing is an important component of the roof truss permanent restraint system and must be designed to resist loads. It is typically attached directly to the top of the top chord members and is sometimes used as part of the roof or floor diaphragm. Sheathing restrains the members that it is attached to and helps distribute the restraint loads out to the building elements that resist lateral loads. Sheathing is the most efficient way to distribute these restraining forces.

Occasionally, sheathing is not attached directly to the truss members. Often, “Z” or “F” (furring) members are used where sheathing cannot span the distance between trusses. These furring members may be designed as restraint members. The designer must include both the bending loads induced by the sheathing, as well as the axial loads from the member restraint force.

With piggyback trusses or overbuilt trusses or rafters, some portions of the top chord are not immediately adjacent to the roof deck or sheathing. Nonetheless, these chord members may experience high axial loads. The designer must ensure that sheathing, furring, or other members are used to restrain truss chords below piggyback trusses and below overbuilt rafters, or design their top chords with longer unrestrained lengths in these areas. CFSB3 Summary Sheet – Permanent Restraint/Bracing of Chords & Web Members

Entire manuals and chapters have been written on truss system restraint; here is an overview of some of the truss restraint options available to the designer.CFSBCSI: Guide to good Practice for Handling, Installing, Restraining & Bracing of Cold-Formed Steel Trusses provides additional guidance, equations, and a method for designing system restraint. This overview includes those factors that need to be taken into consideration.

Lateral Restraint are restraints between chords or webs of adjacent trusses. These are typically placed perpendicular to the plane of the chord or web, and with C-shaped, angle, or tube shaped web members, they can be attached directly to the flanges of adjacent truss members. Lining up the truss webs can make the restraint installer’s job much easier. 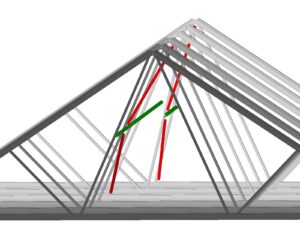 Bridging is a restraint between the top chord of one truss to the bottom chord of an adjacent truss. Bridging may also extend from a location of web restraint to a roof or ceiling diaphragm.

Blocking may be part of the truss restraint system, but it is more likely to be used to transfer lateral diaphragm loads from the sheathing or roof deck down to the shear wall or drag strut below. Blocking may be accomplished using diagonal straps, a brake metal shape, or an actual truss to transfer these loads.

Design of the individual restraints can be daunting and complex, but the use of some simple guidelines can greatly ease the task. “The design should be performed using a minimum of 2 percent of the full member axial forces. There are various other sources that give guidelines and data for restraint force design. It is the responsibility of the designer to determine which source to use and what assumptions are made about rigidity of supports and of the system.

Some engineers (building designers) will include statements in their specifications that spell out restraint design responsibilities. Contractors and truss designers bidding on these documents must carefully read these requirements, to ensure that everyone is clear about who does what before bids are issued. The wording of the structural general notes, as well as the specifications, must be consistent and clear on restraint issues. Although it is the responsibility of the specialty engineer to ensure that the truss elements will not fail, ultimately it is still the building designer’s responsibility to review the design and ensure it is compatible with the other elements of the structure.

Get Help with Restraint Design

Restraint of trusses and truss systems can be complex, and is often ignored by design professionals. Many engineers rely on component manufacturers to give guidance on restraint of truss systems. The Cold-Formed Steel Engineers Institute, the Structural Building Components Assocoation – Cold-Formed Steel Council and the American Iron and Steel Institute (AISI) have excellent resources available that give general guidelines. However, the engineer of record is ultimately responsible for the design of the structure, and therefore needs to confirm that the truss system restraint design has been adequately addressed.

TrusSteel offers extensive engineering services through our affiliation with a strategic partner BBD Engineering & Design Firm (www.bbdengineering.com), a fee-based, full-service consulting engineering firm. The local TrusSteel fabricator can provide drawings that illustrate how and where it is allowable to connect restraint and other framing to TrusSteel trusses. 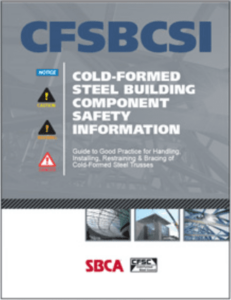